Following their great away win last weekend our men’s team were back at home this week to take on Ballincollig in what proved to be a tough and bruising encounter. Dungarvan started well going through the phases against an awkward wind and worked their way up the field, after about 20 minutes Hickey put us in a great position from a penalty and the forwards took over mauling and rucking their way over the line. Lár Houlihan getting the final touch down. Dungarvan kept the pressure on and had their second thanks to a great backs move sending Daniel Slevin sliding through the Ballincolling defence for another try.  Ballincollig fought back hard and earned themselves three points from sustained pressure in our half. Dungarvan, sticking to the game plan worked hard with the ball and scrumhalf Jack McGrath made a great snipe around the ruck to race clear under the sticks.
The second half, for a second week in a row, started badly for Dungarvan with Ballincollig scoring their first try far too easily. Dungarvan responded excellently though and fought down field to very quickly cancel out the Ballincolling score with Daniel Slevin touching down for his second of the day. With the bonus point secure Dungarvan were guilty of dropping off in defence and playing some sevens style rugby at times, allowing Ballincollig to bring their tally for the day to 15.  The bench brought impact for Dungarvan and finished out the game well. Final score Dungarvan 30 Ballincollig 15. Dungarvan now sit second in the league and face St. Mary’s away on Sunday next 13th October.

First League outing for U18 Squad

Our U-18 team took to the field at home against a strong Fermoy side on Saturday. This was our 1st league game of the season and although still finding our way somewhat at this level, we showed a gritty and at times very skilful display against a very well organised and experienced Fermoy outfit. The conditions were atrocious and in an error strewn game, both sides were very frustrated by poor ball handling in the difficult conditions. Our team led by captain Ronan Foley never gave up and although remained scoreless for the entire game, made it very difficult for Fermoy to settle into any meaningful game plan. The visitors were altogether too strong for us and ran out convincing winners in the end but our squad is still building and we know that we are unlikely to play in conditions as bad as this again this season. We have a huge amount of work to do in order to become truly competitive at this level but there is great spirit in this squad already and we are looking forward to the next test, a friendly away to Cobh Pirates under lights on Friday night week. We know that training together is the only way to improve and the next few sessions have huge significance in eliminating the memory of this loss. 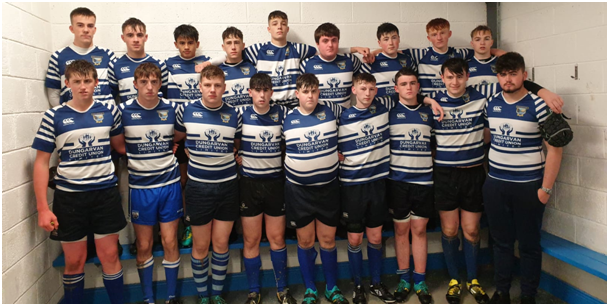 Our U16’s travelled to Midleton on Sunday in the Pan Munster competition. The game was played in ideal conditions on the main pitch at the senior club venue. Midleton had a very impressive array of players but may have underestimated the resolve of the Dungarvan group. Midleton camped in Dungarvan’s half for the first 25 minutes but were unable to breach the Dungarvan defence due to high tackle counts from Tadgh Coyne, Thomas Byrne, Brayden Carter & Eddie Phelan. Dungarvan had a scrum on their 22 when the impressive James Daly Made a half break and slipped the ball to Carter who booted down field to chase and score a great try which he also converted. This provoked a instant response from Midleton who scored a try from one of their physically impressive centres. Dungarvan conceded again just on the stroke of half time to Leave Midleton in front 12-7. As is our ethos, all the squad got a run out & we made five changes at the break. Dungarvan played manfully in the 2nd half but aided by their impressive bench, Midleton scored two late tries, final score 22-7. It was great to have Sean Seaward & Mickey Flavin, who are on their way back from injury, supporting the panel. Our next game is at home against Cork Con next Saturday at 12 noon.
U16 SQUAD: Fionn Bowdren, Shane Power, Tadhg Foley, Thomas Byrne, Conor Davidson, Eddie Phelan, Patrick Coyne, Andy Phelan, Conor Bohane, Edmond Spratt, Donnacha Dunphy, James Daly, Mikey Flavin, Sean Flavin, Brayden Carter, Alan Keogh, Oran Grant, Patrick Osborne, Aaron Ronayne, Gabriel McGovern, Sean Seaward.

Dungarvan U18.5s win away at Skibbereen