Our adult team kicked off their 2019 season away to Cóbh in the first round of the Munster Junior League Division 2 on Sunday. A tough fixture for our newly promoted team. Dungarvan started well keeping Cóbh inside their own half and after sustained pressure were awarded a penalty but the strong wind denied us the points. Determined by the good start Dungarvan went straight back at Cóbh and got their just rewards after brilliant backs and forwards play eventually getting Lar Houlihan over the try line for a five nil lead. There were no more scores in the first half but it was clear that Dungarvan were beginning to assert themselves in the up-front battle. Disaster struck as the second half kick-off was collected by Cóbh and a line break put them into our 22, they quickly converted this territory into seven points.  However, that was to be Cóbh’s only score of the game as Dungarvan rallied and scored twice through the pack, Martin Houlihan getting over the line on both occasions. Dungarvan pushed on for the bonus point win but unfortunately little mistakes cost us. A fantastic start to the season for Dungarvan running out 7-19 winners. A win on the road which could prove vital as the season kicks on.

Dungarvan Credit Union Play of the Month awards for September

On Saturday morning we were delighted to present our Dungarvan Credit Union Player of the Month Awards for September to our underage players. Congratulations to our September winners; Zac Bracegirdle (U8), Paddy Curran (U10), Issac Kenneally (U12), Oisin Mc Cusker (U14) and Eddie Phelan (U16). Thanks as always to all our underage volunteer coaches – we couldn’t do it without you! 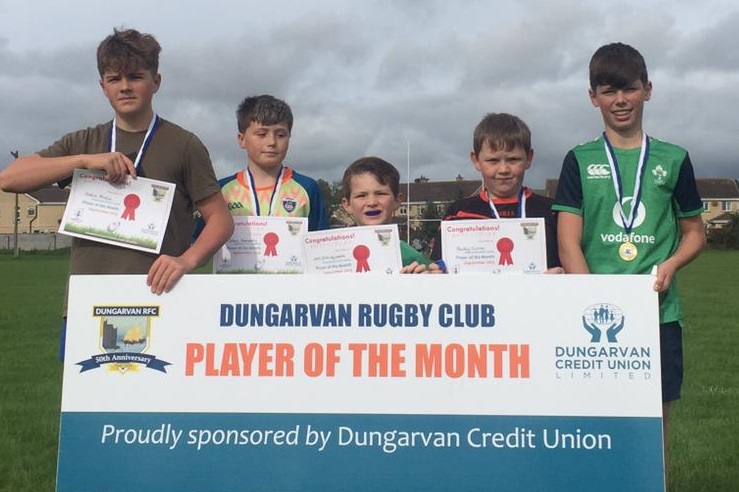 Dungarvan U18.5s win away at Skibbereen